Home / Moving To Australia / Which City Is The Best To Live In Australia? 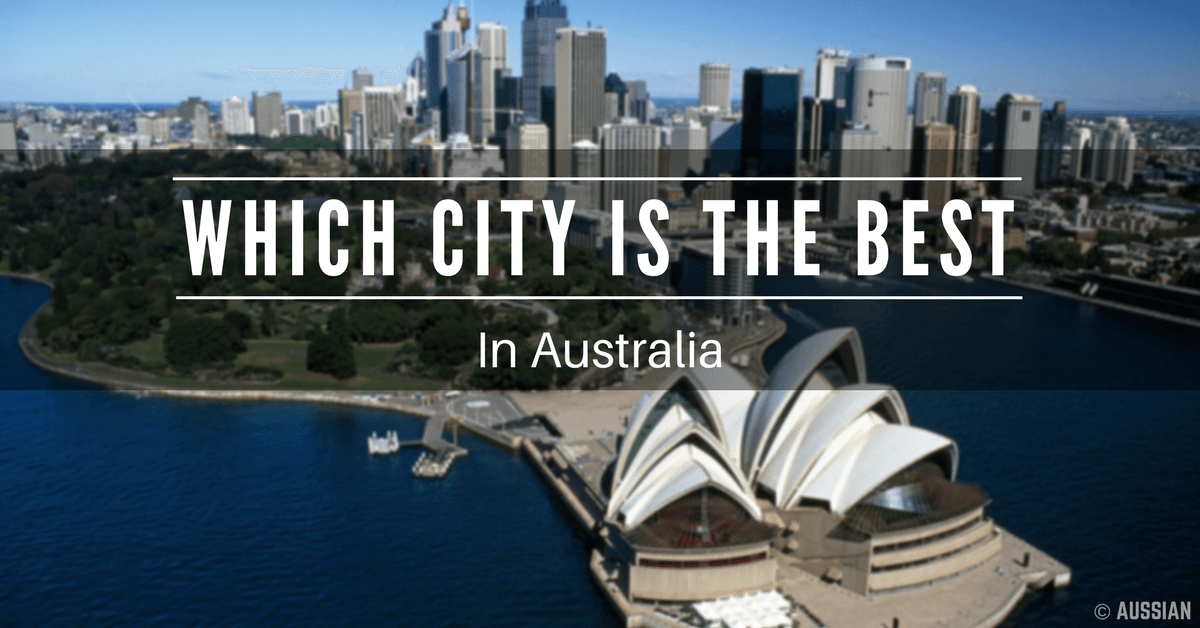 Did you get your Australian PR? Fantastic! Welcome to the club. Next question in your mind must be – where should I live in Australia?

But for people with 189 subclass visa, making that choice is not easy. At least it wasn’t for me. I didn’t even know whether Sydney was on the east coast or the west coast. All my knowledge about Australian cities was from cricket. Apart from Sydney and Melbourne, they were just names to me and some still are, though I have a much better geographical sense of Australia now.

I think we Indians have a much better understanding of the US than other parts of the world. One of my friends amazed me when he told me that there is a city called Moscow in Idaho, US but he was surprised to know that Canberra, not Sydney, is the capital of Australia. 😀

Jokes apart, but finalising a city looks like a trivial task but it’s not. There are a lot of parameters involved, especially if you are moving with family. So how should you choose? No worries. Based on my experience, here are the seven most important parameters which you can use to choose the city for living.

First and foremost task when you move to any country is making money. Most of the people who migrate to Australia come without any job offer in hand. Goes without saying, the city that offers more employment opportunities wins here.

But there is a problem. More employment opportunities will attract other people too. So you have to face stiff competition, meaning fewer job opportunities for you. So you have to find the right balance and a bit of luck too. Remember, no matter what city you choose, you are still up for quite a lot of struggle to crack the first job.

Now let’s take a look at the boring part – statistics. According to the Australian Department of Employment, states of New South Wales, Victoria and Queensland contribute 77% of the jobs in Australia. Of the top three states, NSW contributes the most as evident from the chart above. It is followed by Victoria and Queensland. Department of Employment also predicts future growth in the number of jobs by state. Unsurprisingly, once again NSW tops the chart, followed by Victoria and Queensland. Most of the jobs are concentrated in the major cities  in each of the state. For example, Sydney accounts for more than 66% of the jobs in NSW. Similarly, Melbourne contributes to 77% of the jobs in Victoria. In Queensland, Brisbane gets the credit for 50% of the jobs and similar is the case with Adelaide and Perth.

If you look at the charts above and employment data for the cities, Sydney emerges as a clear winner followed by Melbourne, Brisbane and others. But remember what I said earlier: more jobs, more competition. So don’t base your choice purely on the number of jobs.

Australia is an expensive place to live. Unless you are a millionaire ready to spend a fortune, you need to give some thought here. Sydney is generally considered the most expensive city to live in Australia but others are not too far behind. Most commonly, two things make up for nearly 80% of family’s living expenses – rent and child care – both of which vary depending on the city.

In order to find out which city suits you better in terms of cost of living, you can visit Numbeo to make the comparison. It gives you a detailed comparison of two cities based on various factors such as rent, eating out, groceries, transportation, child care, utilities and so on. Let’s again plot the data to compare different cities. A note here: statistics on Numbeo is based on people’s feedback. Though it uses sophisticated technology to remove borderline cases and provide a better estimate, ultimately it is user input.  So it should be taken with a pinch of salt as different people have different lifestyle and habits. Based on your lifestyle, you may find one city better over the other.

Moving to a new country is a tough job. You are going to face a lot of difficulties, especially in the initial period. It helps a lot if you already have relatives or friends living there. If you have a family with young children, it can be life-saving to have some support. If you need a temporary place to stay, need help to move from one place to another or need help to babysit your child or feel homesick, they are the ones you can rely on. They will be the only people who will make you feel at home. They can quickly get you on board about how to live in Australia.

This is another crucial factor to look at after employment and cost of living. Nothing else matters if you have the right people to help you when needed. As an example, when I first moved to Melbourne, I had an ex-colleague and friend who helped me with the initial accommodation. He helped me get myki pass for public transport, bought me a SIM card and helped me choose the plan. He helped me move my stuff and even gave me some of his own stuff when I rented a place. These are the small things which can make a big difference when you are new to everything.

Australia is huge, I mean really massive. When you arrive as a new migrant, you don’t have the luxury of riding a car. Even if you can afford it, you still need time to get the full Australian driver’s license. One way or the other, you will have to rely on public transport for the initial few months.

Now let’s look at the cost factor. Once again I turned to my trusted source – Numbeo for the data. As can be seen, one way ticket and taxi fare are fairly the same in all the cities. Monthly pass however has a lot of variation across the cities. Sydney and Brisbane ranks equally high for monthly pass however Brisbane is slightly more expensive in terms of overall transportation cost. Canberra however is the cheapest of all followed by Adelaide and Melbourne. This should give you some clarity on which city is better in terms of public transport.

When you say Australia and safety, the first thing that pops up in our mind is racism. Well, like most of the things portrayed by media, it is not true except for a few random cases. I won’t say that Australia is a paradise with no crime but it is not a hateland either. With it’s strict gun-control laws and strong law enforcement, Australia is safer than the US. Once again Numbeo gives us a good idea to compare crime rates by various Australian cities. According to the current safety index by Numbeo, Canberra proves to be the safest city with a score of 75.59 and Townsville to be the worst at 37.39. The two big cities Sydney and Melbourne are nearly the same, however, Melbourne’s reputation slowly going south due to frequent gang-related violence lately.

Are you a beach lover? Do you love sunny weather with occasional showers? Do you love chilly winters (seriously?) Well, there is a place for everyone in Australia. Melbourne with its infamous erratic weather can give you taste of all seasons in a day. Otherwise, it’s mostly quite chilly and windy, a bit like Chicago. Sydney on the other hand is moderate and humid and most of the time quite pleasant, though it has it’s own share of heat waves as well as thunderstorms.

Brisbane has comparatively the best weather of all the cities, with winters not too cold and summers not too hot. However, during the winter time, massive thunderstorms and flooding occur in Brisbane. Perth is hot and dry and most of the time gets a lot of sunshine, sometimes a little too much. Similar to Brisbane, winters there are not too cold and the temperature rarely goes below zero degrees. In short, Australia has a wide variety of climate and choice is yours.

This is not really a prime factor in choosing a city, however an important one. For example, a sports-loving person will probably get bored to live in Canberra. At the same time, peace loving person may find Sydney too crowded and fast. Similarly, if you love nightlife, Adelaide won’t be high on your list.

If I compare cities in Australia to cities in India, Sydney would be like Mumbai – busy and chaotic financial hub but iconic and full of energy. Melbourne would be like Bangalore – a lot of gardens and greenery, lots of sports, festivals and cultural events, a bit slow compared to Sydney but still with it’s own character. Brisbane is probably like Pondicherry – great weather, nice beaches and a peaceful life. Gold coast is like Goa – highly popular with tourists, a lot of sunshine, full of tourist attractions and great beaches.

Perth is more like Chennai – hot (but not humid) weather, nice beaches but far away from other cities. Adelaide is like Pune – sleepy and small town, nice weather, quiet and a little bit boring. Canberra obviously is like Delhi, full of government offices, memorials, politicians and a lot of public servants. As I said earlier, it is a matter of preference. If you are can’t decide between two cities even after all the other parameter, you can use this as a tiebreaker.

So the question still remains – which city is the best to live in Australia? The answer is whichever you like the most. As each individual has different tastes and preferences, what I think is the best city will not be the same for you. However, I hope that this post gives you some foundation using which you can finalise your choice. If not, probably toss the coin. Just kidding! What are the other things you would look at when choosing a city? Let me know in the comments.

Nullarbor Links is the world’s largest 18-hole golf course which spans over 1365 kilometres and across two states – South Australia and Western Australia. It has one hole in each participating town. Are you ready for the big game?