2nd October 2017 was a very special day in my life. Never have I felt so joyous, so jubilant, so liberated ever before. The feeling can only be compared to the man who falls in love for the first time.

Why won’t I? I passed the dreaded VicRoads driving test in a single attempt!

I told my mom, my wife, my friends and colleagues. I even told Gardner who came to cut the grass in front of my house. He gave me one strange look, said “good on ya, mate!” and got back to his work. Well, I don’t blame him but for I sure felt like Aamir Khan winning the final race in Jo Jeeta Wohi Sikandar.

My (Brief) Driving Journey In India 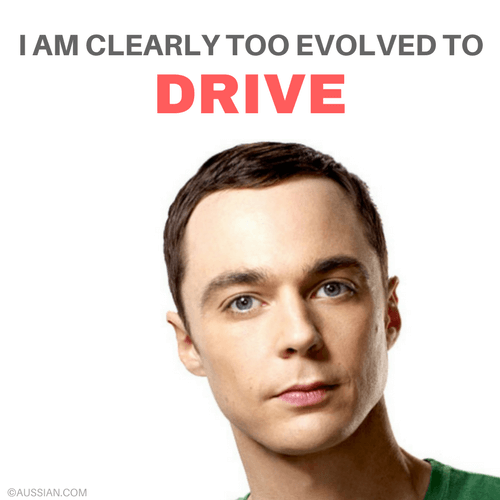 Back in India, I didn’t even ride a bicycle nor did I drive the car except for a few feeble attempts to learn driving.

I was like Sheldon Cooper from The Big Bang Theory, terrified of driving a car.

After some nagging from my wife (yeah sometimes you need that), I enrolled in a driving school. But even after completing 10 lessons, I was terrified to the core. My hands would be glued to the wheel and my eyes to the road. I was afraid to even look in the mirrors thinking that I would miss something on the road and crash.

After finishing the course, I made enough progress to get the car in and out of the parking spot without hitting the pillars or the neighbour’s car. Learning in a manual car didn’t help either. My biggest achievement was to get the car in the first gear without stalling. That too on my lucky days. Duh!

Learning to drive in India, especially in Pune, is not for the faint-hearted. I didn’t want to be another Bhai crushing beggers or pedestrians. Driving in India was like a mad hurdle race with no rules. So, I wanted to keep a safe distance between my car and the vehicle ahead of me. But somehow bikers or auto-rickshaw drivers used to smell my intentions and happily put themselves between us. They were like that pesky friend who grabs the seat in the movie theatre next to you that you intentionally left empty for your girlfriend.

Whenever I followed the traffic signal, it irked the drivers behind me who used to honk and make angry gestures. Being a newbie, I thought it was probably because I was slow. But later I understood that I was not supposed to watch the traffic light ahead of me but the one of the intersecting road. As soon as that light turned orange,  I had to put the pedal to the floor irrespective of the signal (or people) in front of me. The driving school doesn’t teach that kind of street smartness.

Parking is another (horror) story. There is no parallel parking or angle parking, only bad parking.

In India, there is no parallel parking or angle parking, there is only bad parking

First, you won’t find a space to park your car. If somehow you manage to do that, there is no guarantee that you will be able to get it out of parking. At one time, I had to make a public announcement in a shopping mall to call for the biker who parked in front of my car blocking my way to get out. Double parking is common.

At my office, we used to share photos on the Intranet of the car who parked horribly just to name and shame. Some of those photos left me wondering how these guys got their driving license at all. I mean I can understand parking on the edge of the parking spot, but how could you manage to park halfway between two parking spots? These must be the same people who get two plates full at the buffet and then waste more than half the food.

Why Can’t You Get Driving License, Like Everybody Else?

Like Sheldon Cooper of TBBT, I didn’t have a driving license. Though I was not busy making impressive scientific discoveries like him, I had my own reasons.

Of course, getting a driving license in India, especially in the old days (and maybe now) was pretty easy. You don’t have to drive a car to get the license. Just pay some extra money to the driving school or license agent and you will get a license without leaving the comfort of your home.

Nowadays, you have to take the test. A path will be created by placing traffic cones at certain points. Most probably it will look like number 8. You need to drive the car along the path without hitting those cones. That’s it! Still pretty easy.

Even then, I didn’t get my driving license. Why? you would ask.

First of all, I was living in Mumbai for the most part of my life. In Mumbai, if you drive your own vehicle, there are only two reasons. Either you are so stupid that you choose stressful driving over cheap and easily accessible public transport (or cabs). The second reason is that you just want your own vehicle no matter what.

Neither was the case with me. Besides, I never really thought of moving out of Mumbai, let alone out of India. So it never occurred to me to get a driving license.

In retrospect, I was too naive.

I only thought of getting a license when I started the Australian PR process. However, by then it was too late.

Tip
In Victoria, you must have at least 3 years old overseas driving license to be eligible to convert to full Australia driver’s license.

As per the VicRoads (Road Transport Authority for Victoria) rules, you need to hold an overseas driving license for at least three years to be eligible to get full Australian driver’s license. So getting a fresh Indian license was as silly as buying CD for iPad. So I ditched that idea, focused my energies on other tasks and decided to worry about driving license later when I moved to Australia.

The Need For Driving License

Melbourne and most of the metro cities in Australia have good public transport, especially if you live in and around the CBD area. In Victoria, you can use one travel pass called Myki for all the modes of transport i.e. Train, bus and tram. So when I moved to Melbourne, getting a driving license was not very high on my list.

It proved to be a big mistake. First of all, public transport didn’t turn out to be as good as I initially thought, especially in suburbs and on weekends or public holidays. You would have to wait for anything from 30 minutes to 1 hour to get a bus on weekends. Signal failures and other problems constantly disrupt train schedules in Melbourne.

Secondly, during the initial days, I had a lot of time to prepare for the driving test. At least I could have got my Learner’s Permit and be ready for driving test later in the year. As you get a job and bring family, your free time goes down. Anyway, it’s no use crying over spilt milk.

Tip
If you can, try to get the driving license as soon as you move to Australia. This will help you quickly get settled in Australia. Plus, it is universally accepted proof of your identity and address.

When my family joined me in late 2015, the need for the car went from “we can manage without a car” to “we must have a car, NOW”. Living without a car is almost like living without a phone – you can get through most parts of your daily life but it takes a lot of time and energy, especially if you have kids. I won’t bore you with details but you can imagine how crazy it is to push the pram in freezing rainy weather of Melbourne.

After almost a year of hardship without a car, I finally bought a car in June 2016. As you can imagine, since I didn’t have the license, I had to get the help of my friend to test drive and bring the car home.

How To Convert Overseas License In Victoria

There are a few more countries which are recognised but you still need to take the driving test if you are below 25 years of age.

If you have a driving license from any of the above two lists of countries, you can simply visit any VicRoads centre, pay the license fees and get the full Australian driving license. Sadly, India is not in the recognised countries list. So to get the Australian license using Indian license still requires road law knowledge test, hazards test and driving test.

But before that comes another hurdle. You need to get a Driving License Extract (DLE) letter from Indian RTO.  DLE is basically an assurance from RTO office that the driving license given by them is genuine. This is especially important if:

Getting DLE is simple.

You need to write a letter requesting the same (some RTO may have a specific form which you can fill). You need to submit it along with a self-attested copy of your driving license to RTO office along with the fees. RTO will then issue DLE within a few hours (or days, depending on RTO). Please make sure that DLE has your name as per the passport and has proper stamp and seal.

Recently, however, VicRoads changed its rules. They don’t ask for IDLV anymore. Instead, you need to book a license verification appointment at VicRoads centre. VicRoads nowadays does an independent verification of your driving license instead of relying on Consulate certificate. So it is better to call VicRoads before going IDLV route. That will save you time and money.

Thankfully, when my wife got her Australian license in 2016, she didn’t have to go through all this hassle (though she had to pass all the tests). VicRoads didn’t ask her to provide DLE or IDLV. VicRoads office at Heatherton was happy with her smart-card license along with passport and marriage certificate. This was pleasantly surprising given the horror stories that I heard about VicRoads not accepting Indian licenses without IDLV. It was even more shocking that they accepted her driving license with the maiden name even though her passport had the married name. Maybe it was her lucky day or the officer was very generous, but it worked in our favour anyway.

In the next part, I will tell you how I embarked on the journey to get the Australian Driving License. It was not easy but if I can get it, you definitely can. So if you have an Indian license, that’s great but if you don’t, don’t lose your sleep over it. You will get there eventually, like me.

Australia is a major exporter of camels to Saudi Arabia, UAE, Brunei, the United States and Malaysia. Ironically, camels were first imported to Australia from India and Afghanistan in 19th Century as a means of transport