After my wife got her full Australian driving license without much hassle, it was now my turn to be ready for the trial by fire. After giving so many tests throughout the life, I am practically immune to any type of test or at least I thought so.

Being an Indian, taking a test is as natural as breathing to me. It is just that someone watching over my shoulders and judging my skills makes me nervous. Unfortunately driving test is all about that. But more about that later. 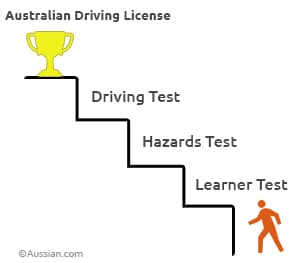 This test checks your knowledge of driving rules and laws in Victoria. It is a computer-based test with multiple-choice questions. If you read the Road to Solo Driving handbook carefully, cracking this one should be a piece of cake really.

Once you clear this test, you will be awarded the Learner Permit. It is the most basic type of driving license and comes with many restrictions. The major limitation is that you are allowed to drive ONLY under the supervision of a person holding a full Australian driving license.

On Learner Permit, you cannot drive without the Australian full license holder watching over you.

HPT is a computer-based test to see how you respond to different hazards and dangerous situations on the road. Basically, you are shown video clips of different traffic scenarios and you are asked to click to do particular action when it is safe.

For example, the clip might show your car standing on an intersection with oncoming traffic. You need to click when you find a safe gap. It is all about timing. Based on how early or late you respond, your answer is ranked. If you practice well, this should be easy enough to pass.

This is the scariest and most difficult of all the tests. Once you clear the Road Law knowledge test and the Hazard test, you can book an appointment for the driving test at any of the VicRoads centre of your choice. Here, the VicRoads examiner checks how well you follow traffic rules as well as your road awareness. She judges you based on different parameters such as vehicle control, compliance with traffic rules and limits, safe driving, gap selection, lane discipline etc. The test is approximately 45 minutes long and consists of residential areas, highways, different speed zones and busy traffic areas.

If you pass, you will either get a probationary or full Australian driving license depending on your case. In the case of a Probationary license, if you are under 21 years of age, you will be given P1 (also called Red P) license otherwise you will get P2 (also called Green P) license.

If you fail the driving test, you cannot drive in Australia on your overseas license anymore.

Unfortunately, I didn’t have an Indian driving license, so I knew I had a long way to go.

As a first step, I started preparing to get my Learner Permit. VicRoads handbook is more than enough to understand all the rules and technical terms. Plus, I practised using VicRoads sample practice test multiple times. The practice test has two modes – feedback mode where you are shown correct answer immediately after you answer each question – and practice mode, where you get to see all the answers at the end of the test.

I booked my test at Exhibition St’s VicRoads centre in Melbourne CBD on a cold morning in July. Ironically, it was also my birthday. So I was in no mood to ruin it by failing the test. Even though I was fairly confident about cracking this test, any kind of test makes me a bit nervous irrespective of how easy or difficult it is to pass. Probably it reminds me of my school days which were not so pleasant (sigh!).

I carried below documents as requested by VicRoads:

I was nearly half an hour earlier than the scheduled time, thanks to the early morning train which I took. I was pretty sure the lady on the counter would bark at me – “Wait outside and come back at your scheduled time”.

Luckily, nothing of the sort happened. The lady at the counter was very kind. Once I submitted all the documents, she asked whether I was ready to go for the test early as the test booth was available. I was more than happy to do that.

She then took me to my test booth. It was a small cubicle with the usual setup for the computer-based test. Before the actual test starts, there is an optional practice test to familiarise yourself with the test format. I opted for it to make myself comfortable with all the controls.

The actual test contains 32 questions of which you need to get at least 25 right to pass. Time was plenty as it was a multiple-choice test.

The format was simple and very similar to the practice test. For each question, there would be multiple answers. You have to choose the correct answer and click on Next. You can mark the question and come back to it later for review. In the end, you can review your answers and make corrections if necessary.

As expected almost 7-8 questions were directly from the practice test making it pretty easy to pass. Given the easiness of the test, if someone manages to fail this test, he/she is seriously not ready for driving yet.

As with any other computer-based test, once the test is over, the result is immediately shown to you. You are given a printed score sheet which also lists topics you were weak at, based on your performance.

Once I passed the test, I was asked to stand in front of a camera and my photo was taken for a license. For the first time in my life, I had a better-looking photo on a Government-issued ID card. Usually, I look like an old Hindi movie villain or his sidekick on any ID card. Now I am not Tom Cruise but nor am I the Lord Voldemort! 😛

The license came by post to the mailing address, but I got a temporary receipt which could be used as a proof till I received the actual card. I was happy that my birthday didn’t end on a bad note. Woohoo! One down, two to go.

Hazard test is a totally different ballgame compared to the Driver Knowledge Test(DKT). Where DKT tests your theoretical knowledge of traffic laws, HPT assesses your ability to identify potential risks on the road. In terms of difficulty, it is a couple of notches higher than DKT.

You are shown short video clips taken from the driver’s point of view. You are asked to respond at the appropriate time. If you respond too early, you fail. If you respond too late, you fail. Sometimes, some clips are red herrings, meaning you should not respond at all. The test is extremely simple and yet tricky. It’s like playing Super Mario. You need to click at just the right time to win.

Unfortunately, there is no official VicRoads practice test material. However, there is an online program by the Government of Victoria called DriveSmart, which covers many aspects of the HPT and more. You need to register on the site and complete the online course. It is loaded with lots of useful information, scenarios, quizzes and practice tests on topics such as scanning the surrounding, safe driving, driving in the urban area and countryside, concentration and so on.

Alternatively, there is a short practice test available on South Australia License site which you can use to practice. Although there are very few clips, it gives a pretty good idea about the test format and also about some of the red herrings or trap questions.

It was an early October morning. The only document required was the Learner Permit which I carried. Once my identity was verified, I was given a test booth. It had a computer screen, a mouse and headphone. The headphone is not for the sound effects(that would be fun!), but to read out the questions for those who can’t read.

Again, just before the actual test, there are practice questions which you may skip but I opted them to understand the on-screen controls. In the actual test, a scenario is described and you are asked to respond when safe. It is followed by a video clip and you need to click the button when you feel right. At the end of the test, there is no score. You just get just plain “successful” or “unsuccessful” result along with a list of topics you were weak at.

I hardly took 30 minutes to finish all the questions. The result – Successful – though anticipated was good to see. Hooray! Another easy win. Now all I had to do was to show VicRoads that I don’t just talk the talk but I also walk the walk.

Australia is the only nation which is also a continent. It is also the only continent without any active volcano